Restoring a Victorian villa to its former glory

For Warren Turner, restoring this character-filled home became a labour of love – and opportunity 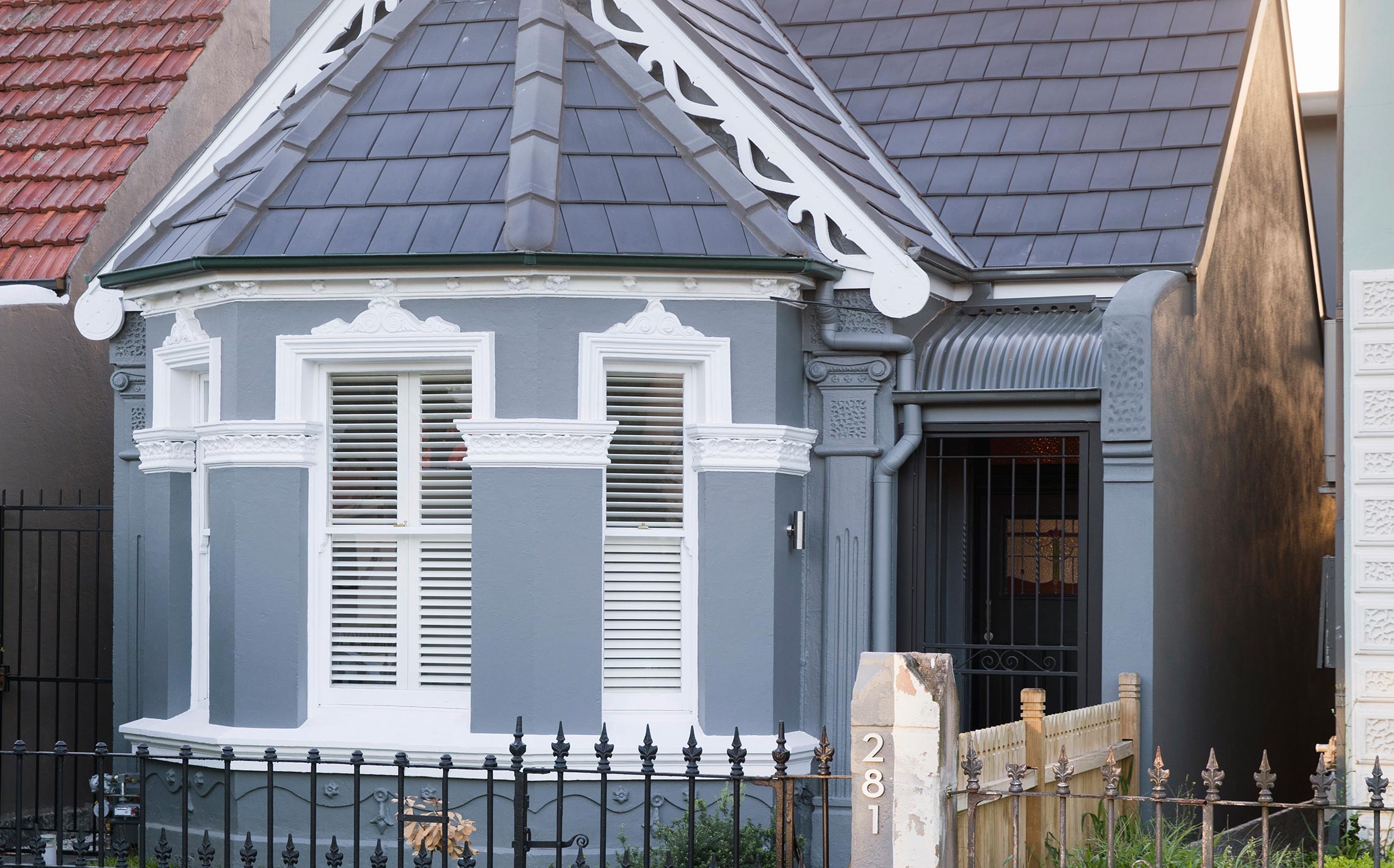 Sometimes what seems like a disaster on a building project can end up being a blessing in the long term – just ask Warren Turner.

While restoring a grand old Victorian villa in inner-city Annandale, Warren encountered a renovator’s worst nightmare when a tradie’s mistake led to the roof collapsing at the beginning of the project.

“What it meant was that we had to remove all the tiles, the whole roof and replace it,” he explains. However, despite the disaster, the incident gave him the opportunity to replace the existing old concrete tiles with a new product that better suited the home’s heritage – Monier Roofing’s Terracotta Nullarbor in colour Ravine. And the end result was so much better, he believes.

“We were looking for a tile to replace the old ones and basically something that looks more slate-like,” Warren says. “I could've put slate tiles on, but there's the cost implication of that and the lead time on slate is quite long. I didn't have any time because the roof had collapsed.”

Additionally, and most importantly, the Nullarbor tiles helped Warren’s renovations meet the NSW Government BASIX requirements – a certificate that assesses energy/sustainability standards and essential for work over $50,000 in value. 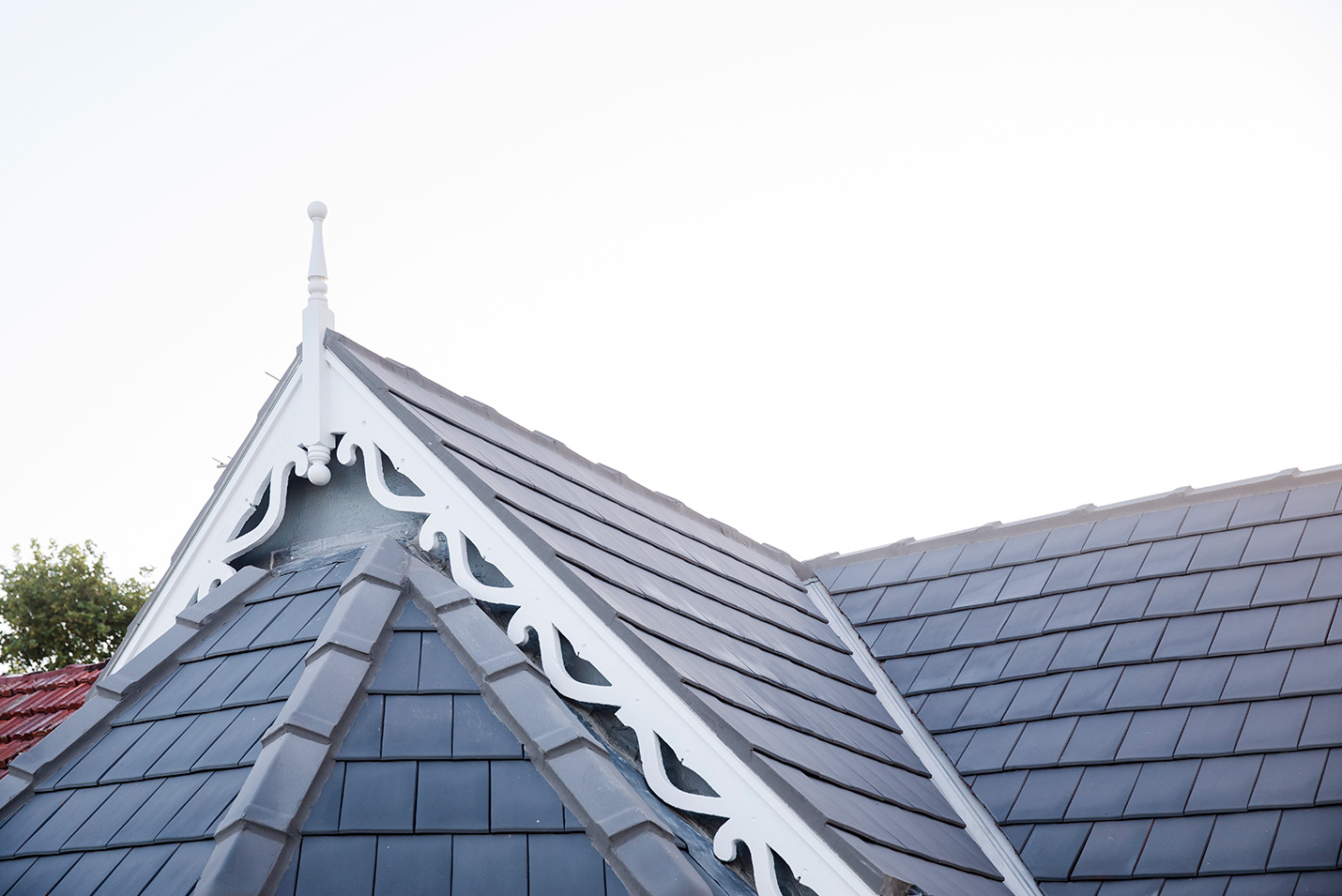 “It met the BASIX requirement for the house,” says Warren, simply. “So, it ticked all the boxes for us, and it looks fantastic on the house.”

Working with local architect, Chris Brookes of Brookes Architects, Warren managed to restore many of the heritage features of the villa, including a front pathway of tessellated tiles and stunning bay window. A dark grey – Dulux Teahouse – complements a crisp white (Dulux Vivid White) used on the heritage features of the house, including fretwork and window details, allowing the architectural elements to shine.

The renovation was an extensive one as the original building was pretty well unliveable, says Warren. Located in one of the best streets of Annandale, only the front three bedrooms of the house were retained and then the rest was gutted, with a studio apartment/garage built on the rear lane. 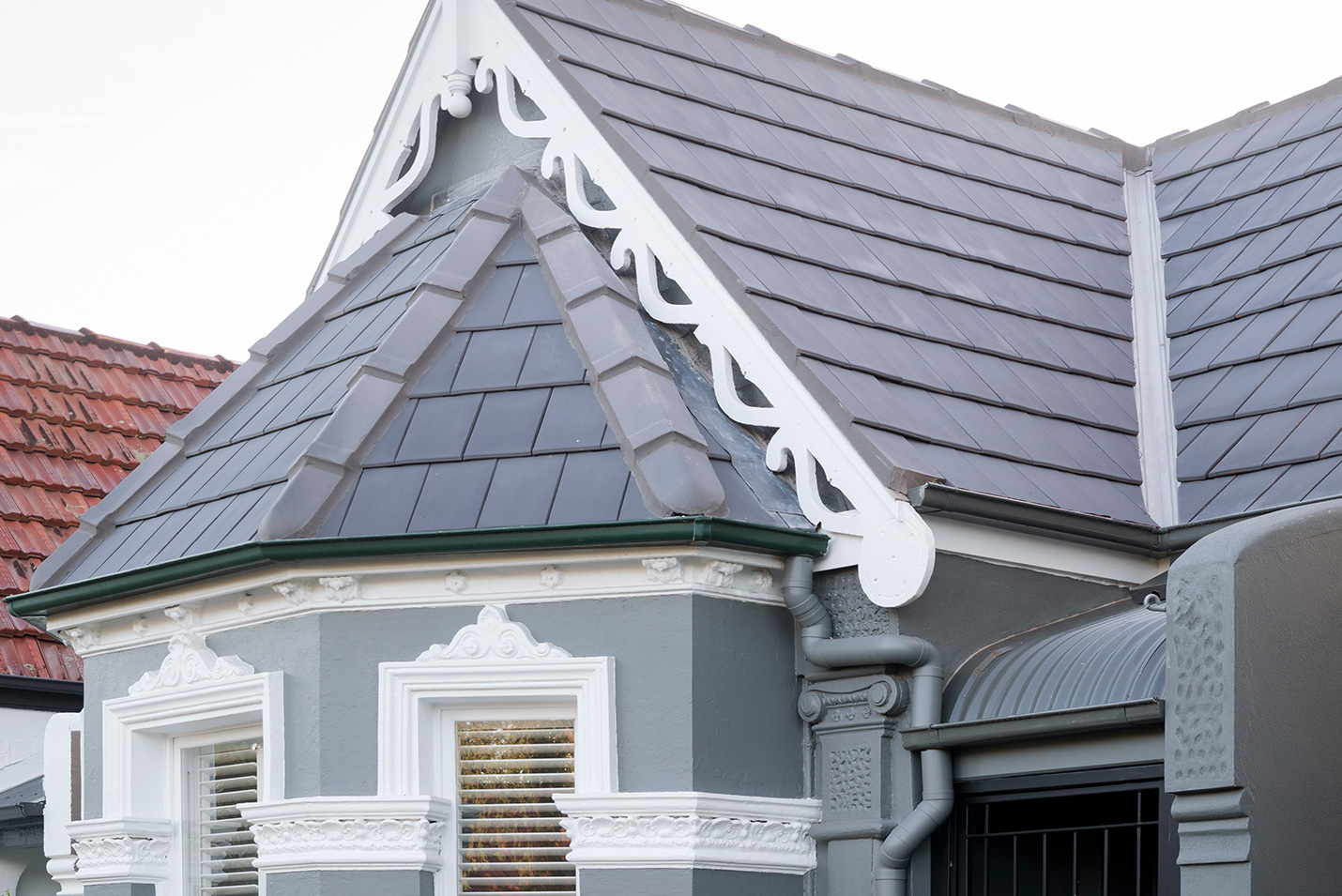 “So we removed all the rear lounge, kitchen, dining and that area but kept the front three bedrooms,” he explains. “We turned one bedroom into a bathroom and then added two bedrooms upstairs. In the end we had two bedroom upstairs, two bedrooms downstairs and then a walk-in robe and a bathroom that fits within the roof space.”

The final product is a luxurious and generously proportioned home with an abundance of heritage features internally and externally – all treated with care and respect. Because the house was in near-original condition, it meant that the character had been retained.

“A lot of the houses nearby us had all had their beautiful bits and pieces removed,” says Warren. “They'd all been ripped off and so-called modernised. So we were very lucky from that point of view.” 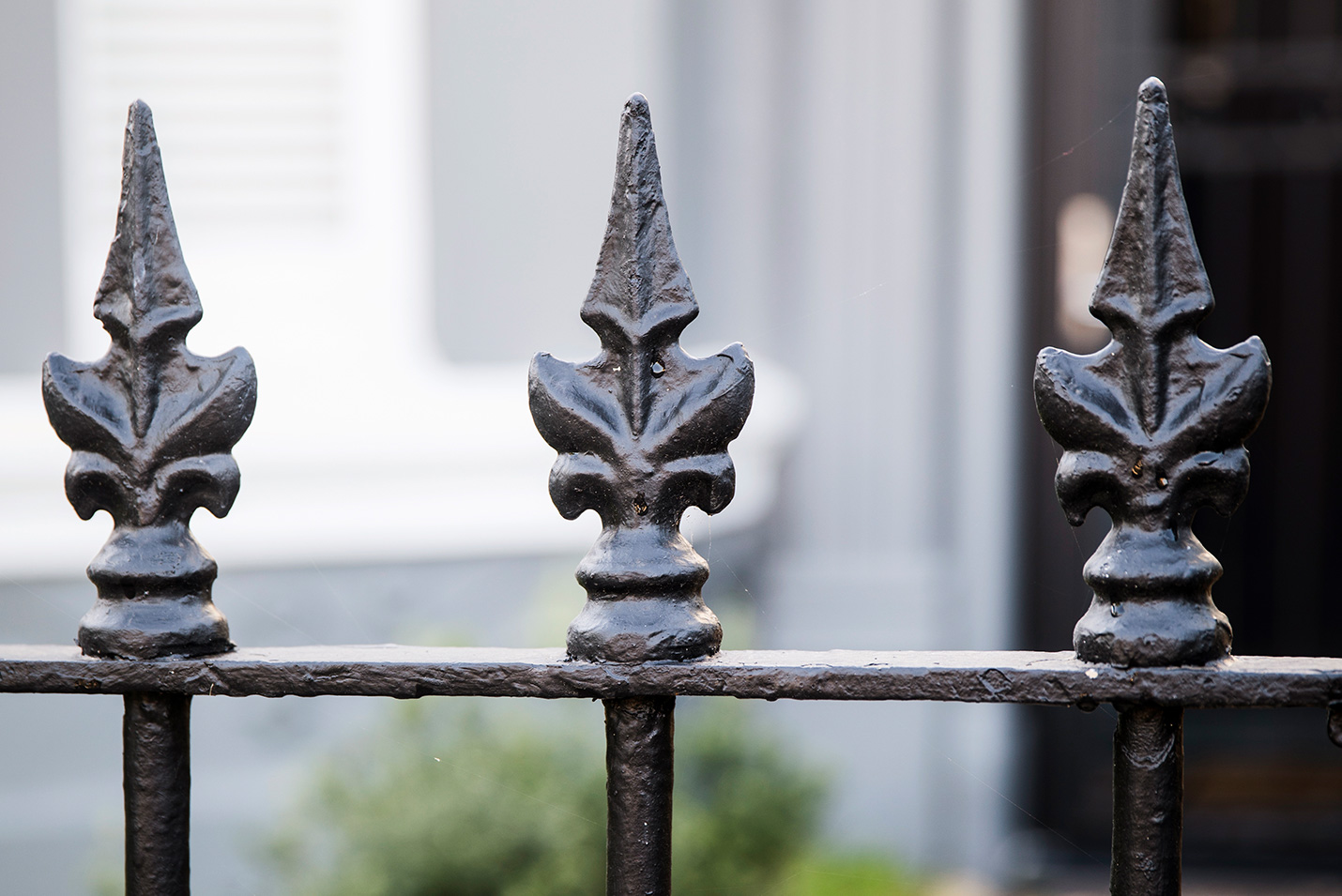 It’s all in the details:

Warren sourced replica tessellated tiles from Victoria Federation Tiles for the front pathway. The original tiles were damaged, but they kept photos of them and had them copied in the same pattern.

With the rich dark palette of the restored house, the Terracotta Nullarbor Tiles in Ravine will keep their colour for decades, and protect the house in terms of thermal properties, while still offering the look of traditional slate tiles.

The front fence was largely intact, just requiring some minor repairs and painting. Similar Victorian fences can be found at Terrace House Factory in Sydney’s Leichhardt, which specialises in heritage architectural details.

Timber details are an important part of Victorian architecture, with Warren and architect Chris Brookes painting the timber in Dulux Vivid White to highlight the heritage features. 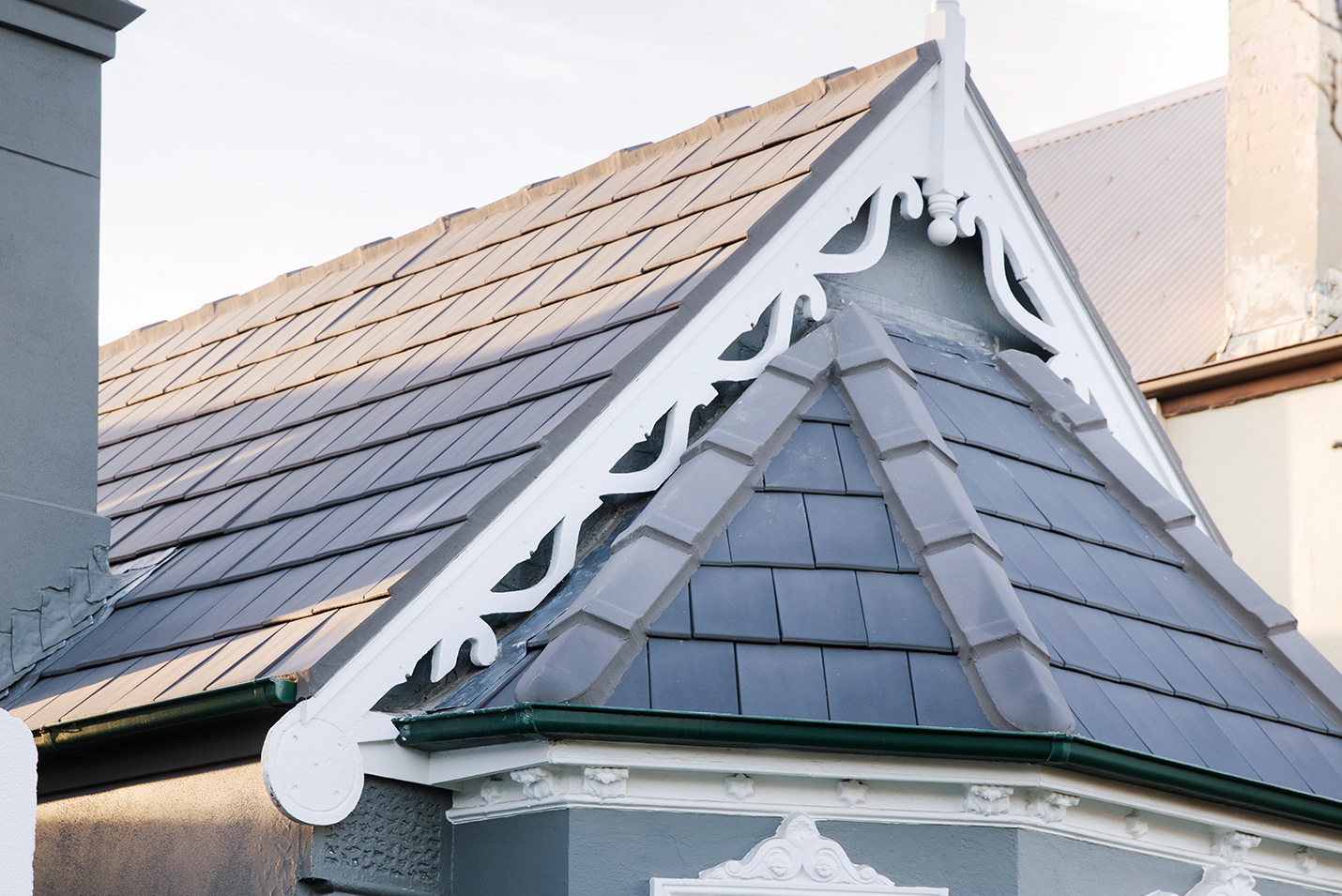