After an extensive and stylish renovation, the Higgins family decided they needed a roof that matched their new home. 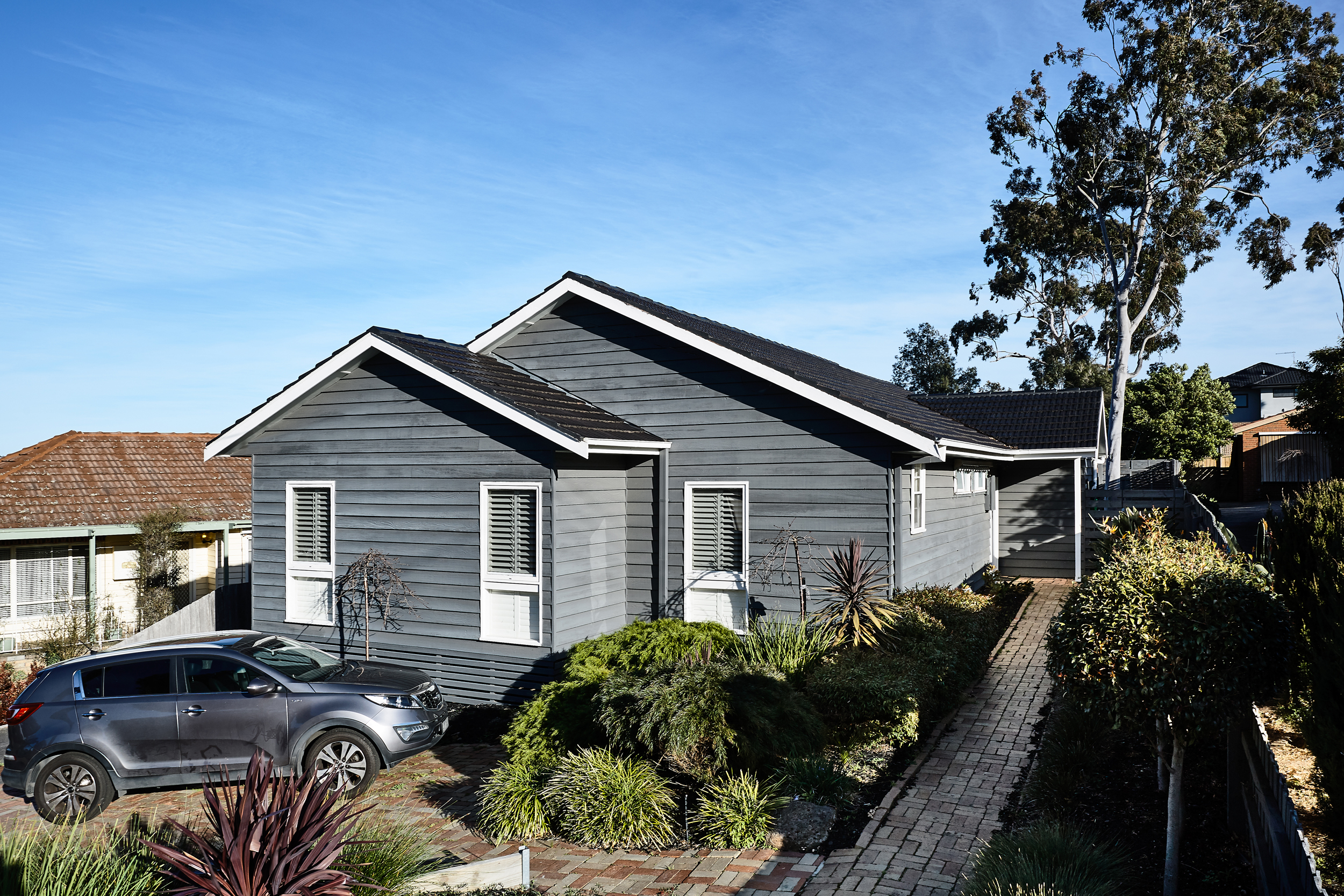 Melbourne couple Jen and Brad Higgins know how to renovate – and have an eye for style. As soon as the couple spotted a rundown post-war timber cottage in Heidelberg, they could see its potential.

Brad works in the building industry, Jen works in marketing and together they make a great renovation team. They immediately saw what could be done to the house, which was in a great location on a decent-sized block of land.

The house was built in the 1950s, and although it was structurally sound, it was ugly and had an outdated floorplan, says Jen. The couple has three-year-old twin girls and were keen to turn the house into their forever family home. As soon as possible after settlement, they set to work.

“It had an old kitchen and brick tiles on the floor,” Jen says. “It was horrific. We ripped up the floors in the lounge and dining; we ripped out the laundry; we opened the space up; we built a butler’s pantry; we changed the zoning of the bathrooms and created an ensuite for the master. “We moved the location of the hallway. We put built-in wardobes in; we recarpeted. We repainted; we changed windows, doors, we did everything!”

After six months of intense work, the inside was looking pretty good, she says – as was the exterior, which had freshly painted charcoal-coloured weatherboards. That’s when they decided it was time to tackle the roof.

“The house was built in about the ’50s and the roof had not been updated since then,” Jen explains. “The cement tiles were clearly decaying and the roof’s colour and quality had worn and it did not look good . They hadn’t been maintained and there was lots of dirt and mould – it was horrible.”

“We had done a lot of work internally and externally and it was really bringing down the look of our house. We had painted the house; we’d redone the gardens; we’d renovated inside and the roof was kind of just this ugly thing that stuck out.

“We decided to invest in a good-looking black tiled roof.”

Jen and Brad chose Monier’s Nouveau terracotta tiles in Titan, which are incredibly long-lasting – they have a 50-year warranty – and their colour will never fade, ensuring that their good looks will remain. They are also made locally in Melbourne, which is a nice touch.

“We have painted the house a lead grey colour with white window trims and so the black roof was going to work really well,” she adds. “We did consider steel as a roofing option, but we thought it just wouldn’t work with the look of the house and we didn’t want to see the wearing and colour fading like we did with the old roof.”

Brad’s brother runs Higgins Roofing, so they had access to great tilers, which also helped in the decision making.

“The Higgins Roofing tiles guys checked for structural defects and anything that did need to be upgraded and they looked at replacing all the sarking,” Jen adds, an addition which helped to insulate the house. Terracotta tiles are made from natural materials and are known for their thermal efficiency.

How to modernise a post-war cottage

1. Look to implementing a modern palette. Jen and Brad went with a striking monotone colour scheme with charcoal coloured paint on their weatherboard home, offset with crisp white trims.

2. Jen wanted to have a striking front entrance and loves her new front door. “It’s a gorgeous front door,” she says. “It’s white with black handles and in a period style; beautiful.”

3. Classic roof tiles. The Noveau terracotta tiles chosen by the Higgins family have a traditional profile that complements the period of the house and showcase the intense colour that Jen wanted.

5. Use greenery for contrast. Evergreen planting against the dark exterior creates a striking contrast that makes a statement. 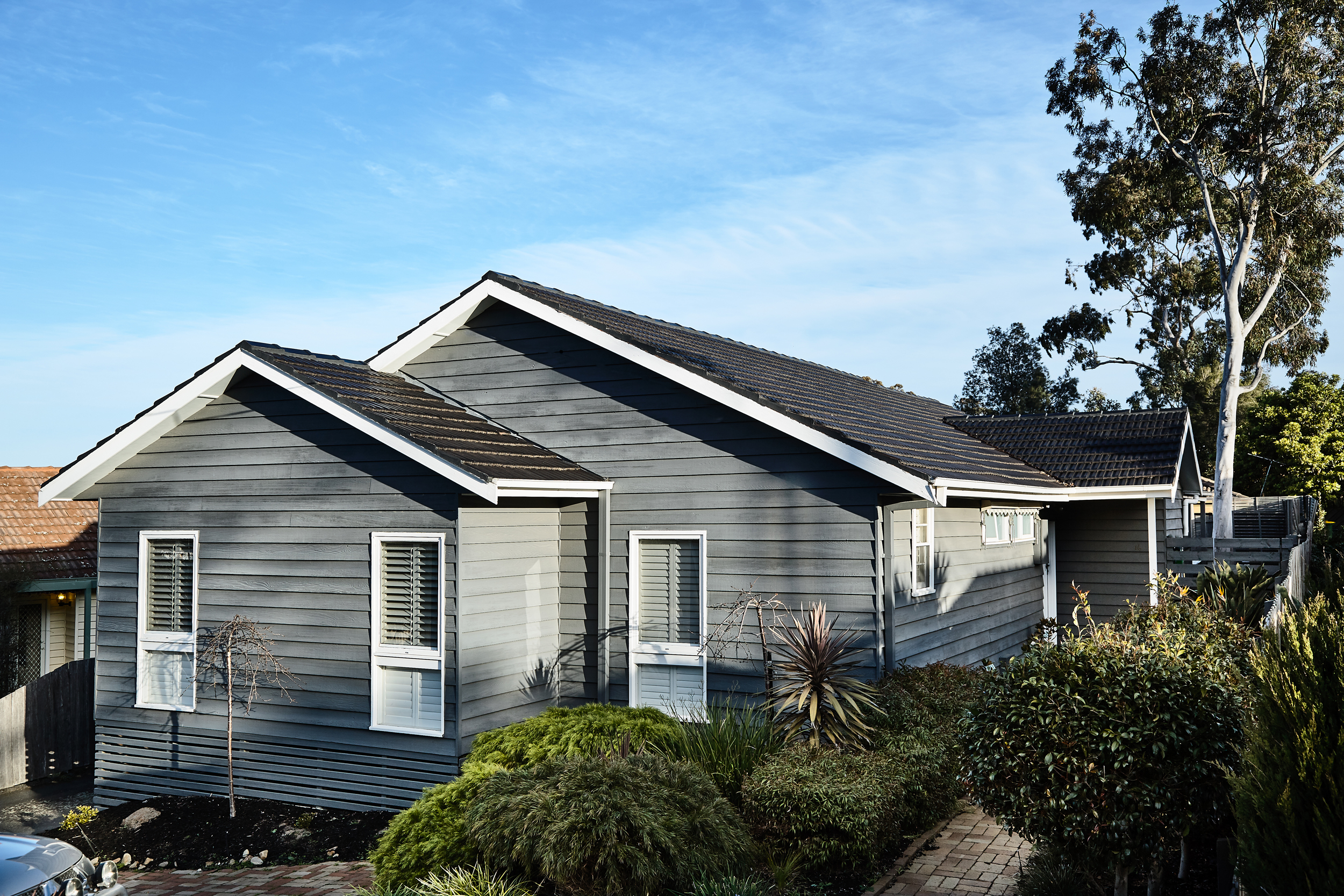 With so many colours and styles available, you can find the look you want with Monier.

Get some inspo with us.